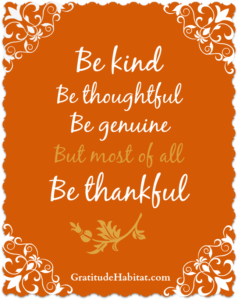 Maybe this is what you need today. Some tradition, some gratitude, something to be thankful for. He’s in his late 50’s, his dog is 15. They’ve been homeless for a few months now. They found a small camp of really nice folks, several of them have dogs. We met a couple weeks ago, he asked for a very specific dog food called Thanksgiving Day Dinner. We know the food well; it’s packed with turkey, sweet potatoes, carrots, green beans and more. And for the last many years, this man’s dog has enjoyed that food on Thanksgiving. That is their tradition.

A few months ago everything fell apart, and today, their Thanksgiving will be a very different one. Surrounded by some new friends, they will pool their dollars and head to the store to buy whatever they can. They will not have turkey or mashed potatoes or green bean casserole or any of that. But he said they will still be thankful. He laughed and said it’s probably good they won’t have turkey, because some of the others at the camp are vegan. He made a funny face when he said that, then I told him I’m vegan too, albeit an imperfect one, and I found vegan Thanksgiving to be delicious. He said he’d need to try it sometime.

But that dog food, that was the most important thing.

He wanted to treat each of the dogs at the camp to their own dinner, but each can is about $4 and he only had money for two cans. By chance, did we have any of it to share? Of course he would pay us back soon as he could.

During the past few months this man’s life had turned upside down. He’d lost his job, his home, and much of his self-respect. His dog doesn’t know any of that. Which is why this day, this tradition, is so important. He said it’s most important for his dog, but we know it’s just as important for him. And when self-respect hangs on some cans of dog food, well, we can fix that.

We had the food but told him we didn’t, but we’d get it and deliver it. He said thanks. We made a visit to the camp a few days later, just for a look-see. It was small and tidy and the dogs were in excellent condition. Several of them sported winter coats that The Pongo Fund gave out a few weeks ago, and it turns out they also used the Canidae dog food we provided, so we were glad to know these dogs were well cared for.

We asked about their Thanksgiving plans. They said they’d sit down together about 2pm and share whatever they have. We told them we’d have the dog food there around 1pm. And we left.

And then we made some calls. And those calls were answered.

And that’s why, in just a couple hours from now, as you’re sitting down to dinner, two cars will park at the trailhead and a small group of people will make the short walk to deliver four cans of Thanksgiving Day Dinner dog food.

That’s right. A small group will deliver those four cans of food.

Because along with those four cans will be a Thanksgiving Day Dinner for the people too. Turkey, potatoes, casserole, pie, the works. All of it vegan. All of it prepared and served with love.

Unfortunately I won’t be there in person, but my heart will be. And I send a special thank you to those who answered my call for help and told me they would get it done.

Today is Thanksgiving. I am Thankful for much and for many.

I am Thankful for you.

May your day be filled with Peace, with Joy, with Love.

“If you are really thankful, you share.” – W. Clement Stone