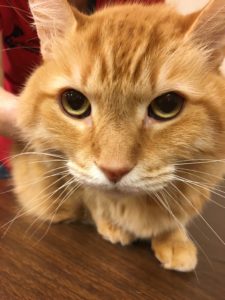 There was this cat. And his Mom. They lived in a homeless camp near a Costco store. Jim died, he left behind his cat, he was 16, they’d been together forever. She needed help feeding the cat. But she hated to ask because she knew others had it worse. She lives in a homeless camp and she’s worried about others having it worse?

She collects cans and bottles but these past few weeks have brought less cans and bottles. She said more people seem to be returning them since the deposit doubled to ten cents. You can read the Wall Street Journal but this homeless woman collecting cans and bottles could pretty much tell you the same thing. Economic indicators pointed downward, her bottle returns had decreased. She could not afford cat food.

When I arrived, I saw her bending into the curb and picking up cigarette butts. That’s something that gets me. When someone picks up someone else’s cigarette butts to smoke the last few bits.

I asked about the cat. She said her arthritis was really hurting and she could not carry the cat and the carrier, so the cat stayed at camp. She described the cat, he was a redhead and he liked to cuddle, and he sounded glorious. I asked for a photo, she said she did not have a cell phone. “Do you know how expensive those things are?” I nodded yes, as I silently thought about the phone in my pocket that I take for granted.

“Because sometimes the birds eat them by accident and it’s not good for them.”

But it’s not just the butts she picks up.

She said whenever she can, she also picks up the trash that others leave behind. And sure enough, the little stretch of gutter where she was standing was clean. She said that sometimes people see her and call her trash. But she picks up trash. She knows the difference. She wishes they would too.

I’m standing next to a Saint of a Woman. She’s homeless and caring for her dead friend’s cat, collecting cans and bottles that aren’t there, so she can pay for cat food she can’t afford, and all the while spending her free time picking up someone else’s trash while others tell her she is trash.

People drive by in droves, in and out of the Costco lot.

“Remember to be gentle with yourself and others. We are all children of chance and none can say why some fields will blossom while others lay brown beneath the August sun.” –Kent Nerburn

The Pongo Fund is a tiny nonprofit group doing some really special work. If you’d like to donate, you can do so here: https://bit.ly/2oUZeYh

(photo is not Jim’s cat, but another glorious redheaded cat The Pongo Fund helps)