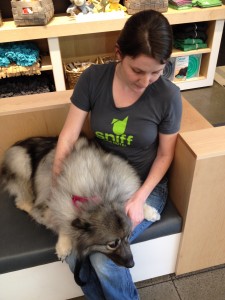 A few days ago a long-haul truck driver passing through Portland was rushed to the emergency room. Once there he learned he was being admitted for emergency surgery. Alone and 1,700 miles from home it was just him and his dog and the rig they rode in.

But his greatest fear was not his own health. It was the dog that stayed behind. The next morning he told his ER physician that his dog Dutch was all alone and had been there all night. With the sun coming up and a warm day forecast, he didn’t know what to do.

Luckily his physician is part of the elite group of volunteers that make up The Pongo Fund. This multi-part story tells what happened from that moment forward as we quickly stepped in to find that truck and to rescue Dutch.

With Dutch curled up and sound asleep in the back of my car I called Francis to let him know that his best friend was safe. And when I gave him the good news there was a pause. A long pause. A pause that made me think he had not heard me. So I said it again. Dutch is with me and he’s safe.

But I was wrong. I didn’t need to repeat it. “I heard you the first time,” Francis said. I just couldn’t speak for a moment.” And as he said those words, I heard the crack in his voice. Then he cleared his throat. He said thank you. And he quickly got off the phone because this United States Veteran did not want me to hear him cry.

It was a special moment. Because at the very same moment I was talking with Francis, just a few feet behind me was Dutch curled up on Scooby’s bed. He was snoring softly. He was content. I was surrounded by the love of this team, Francis and Dutch. And with few audible words or sounds, they both let me know how much this moment meant.

As the saying goes it takes a village. And The Pongo Fund is blessed to have a great village of friends. Every single one of you reading this story is part of that village. Far too many people and businesses to name individually. What we do, we do because of you. We do it with you. We do it together.

Sniff Dog Hotel is part of our village. They help us whenever they can, always quick to remind us to let them know when they can help us again. So when I was on my way to get Dutch I made the call to Sniff. Because I needed to know that Dutch would have a safe and comfortable place to stay.

Without hesitation, their answer was yes. Jamie, one of the Sniff owners, said to bring Dutch over, that they had a perfect room waiting for him.

When Dutch arrived at Sniff he didn’t know what to think. His Dad was in the emergency room, but he didn’t know that. He just knew his Dad was not there. And here was this new place filled with new people and new smells. But he handled it with grace. He stood quietly, wagging his tail softly as he gently smelled his new surroundings.

No one knew Dutch at that point and he certainly didn’t know any of us. But it was a moment of mutual trust. The Sniff staff greeted him by name and escorted him to his room. And he happily followed.

And what a room it was.

A large view suite with a floor to ceiling window, looking north toward a freeway bridge filled with trucks just like the one he and his Dad ride in. And the best part is that in the distance his view faced the very hospital that his Dad was staying in.

There were dual food bowls for food and water, both elevated for ease of eating. And an elevated bed. A bed that Dutch jumped onto immediately. He’d had a big morning and now it was time to rest.

I made another call to Francis to let him know that Dutch was settled and was staying at Sniff Dog Hotel. Francis chuckled. He said “a hotel?” I said yes. He said “a hotel for dogs? I said yes. “Really? I’ve never heard of that.” And I said it was the very best kind of hotel.

And then I described Dutch’s room with a view looking north toward the hospital he was at and his voice grew quiet and made that cracking sound again. But this time I knew he had heard me. And I knew what that cracking sound was. It meant that once again this proud and stoic United States Veteran was choking back tears of joy.

I wished him a great day and told him I’d check back in later to see how he was doing. Because later that day he would be heading into his own surgery.

I got home and told Scooby the entire story as he busily smelled Dutch on my clothes. Scooby knew what had happened and I know he was proud to have played a role in helping this sweet boy that began his day all alone and 1,700 miles from home.

But the best part was that he was alone no more. He had his own village of new friends. He had me. He had Scooby. And he had the entire team at Sniff.

And then Scooby got lots of treats and belly scratchies too.

I visited Dutch again later that day and took him for a walk. He had only been there a few hours but was already wagging his tail when they brought him out to see me. Together we explored the neighborhood and then it was back to Sniff for his dinner and a well-deserved night of rest. A night that would be far different than the night before.

When he returned his new Sniff friend Leslie was waiting for him. He jumped onto her lap as the photo shows. Francis was out of surgery. And Dutch had a lap to rest his head on. He was home. And it was a good day.