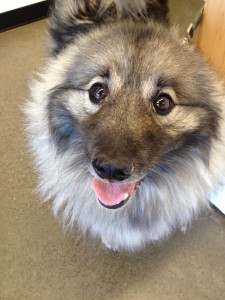 What a day for Dutch! Just a few hours earlier he was all alone locked inside his truck having spent the entire night there all by himself. He didn’t have a clue where his Dad was, unaware that he was lying in an emergency room awaiting surgery.  All he knew was that something clearly was not right.

And now just hours after being rescued he was in the lap of luxury at Sniff Dog Hotel with a floor to ceiling window that offered a view of the very hospital his Dad was in.

I couldn’t help but wonder what Dutch thought of how his day had turned out. What was he thinking?

I’ve always believed that our animal friends are far smarter than we are. And that they know much more than we give them credit for. Aside from the goofy things they do that we really don’t understand, I know you know it too. They don’t need computers to tell us. They do it the old fashioned way. With love.

They know what’s good. They know what’s not good. And to earn their trust is one of the greatest gifts ever. Dutch trusted me because I smelled like Scooby, my almost 20 year-old mix of Beagle, Bassett, Gandhi and the Dalai Lama. Dutch also knew I was there to help. And that trust was the foundation for everything to come.

Some people say that dogs aren’t smart enough to talk. I disagree. I think they are plenty smart and they show it by not talking. At least not in a language we understand. But they really do communicate just fine.

Maybe the truth is we’re just too stubborn to accept how well they do things. And that frustrates us. Just as we’re frustrated by how gracefully they manage to ignore the minutiae and the drama and the grudges and the petty strife that we people stumble over each day.

They don’t text with anger or post nasty comments on Facebook about traffic jams or bad service in restaurants. They focus on what’s important. Because they know that life is a balance. Be good. Do good. Isn’t it really just that simple?

And that’s why I knew that Dutch would be ok spending his first night in a new place. Because he was one of the special ones. One of the wonderful dogs that we all secretly long to be. If even only for a moment.

Most of all, I knew that he knew he was loved. And after a day that would challenge anyone I knew that the love he felt was the ultimate gift. As I drove away after taking Dutch on one last walk for the day I reached for the phone to call Francis.

Because just a few hours earlier he was in surgery and I knew that the best news he could hear right now was another update telling him that Dutch was safe and well and settled in for the night. And I also wanted him to know that he was not forgotten. That we were there for him too. Him and Dutch.

Francis is a man of few words. Even more so after his surgery. But he still enjoyed hearing about how Dutch was doing. And if nothing else I knew he would rest more comfortably and dream sweeter dreams knowing that his sweet boy was safe and happy and well.

I knew that they both needed plenty of rest because the next day would be a big day for each of them. Francis would likely wake to some pain and concern and look forward to good news. And Dutch would wake to breakfast, a walk, a brushing, a bath, another brushing, another walk and lots and lots of love.