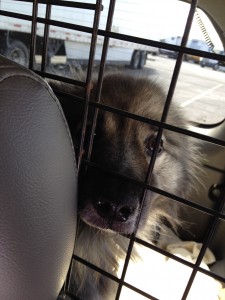 The Pongo Fund has a fantastic group of exceptional volunteers. We have a Pet Food Bank. An Emergency Kibble Response Team. A Pongo to the Rescue Team. A Spay-Neuter Team. A Pongo Meals on Wheels Team. We truly have so very much to be thankful for.

But with everything we do have, what we don’t have is a Rescue a Dog from a Truck Team. That is, not until now.

Shortly after Sarah, the Emergency Room physician and Pongo volunteer, alerted The Pongo Fund to a dog in danger we were on our way to the emergency room to talk with Francis. We needed to learn everything we could about Dutch. Most importantly, how would Dutch react when a total stranger tried to enter his truck?

At the hospital Francis said Dutch was a totally sweet boy. But he admitted he did not know for sure what his 60 pound friend would do when a total stranger tried to enter his truck. And that was our main concern.

Francis was frustrated because he desperately wanted to help. But he could not walk and he could not leave and he knew the only help he could offer was hope and prayers. And then we were off, because we needed to reach Dutch as quickly as possible.

With luck on our side, just 30 minutes after leaving Francis at the hospital we found the truck. The windows were open enough to call out to Dutch, who was likely sleeping on the bed in the cab. So as not to startle him, we softly called his name.

Slowly, a giant ball of fur moved to the driver’s seat. He moved cautiously. He moved in a way that said he was not sure what was going on. And that he knew this stranger was not Francis.

An arm went up to the window for him to sniff. He stepped closer. He sniffed once. He sniffed twice. Several times he sniffed just to be sure. Back and forth he went. And then he sat down and stared.

He did not bark. He did not growl. After several moments of intense sniffing he simply sat down quietly. For some reason he seemed content. Maybe that’s because the stranger at the window was me. And before I left my house I had Scooby roll around in my clothes.  Because no one can resist Scooby.

Scooby, my almost 20-year-old mix of Beagle, Bassett, Gandhi and the Dalai Lama was the very first friend that Dutch smelled. It was Pongo to the Rescue and Scooby to the Rescue!

The next moment was truly rewarding. Because Dutch sat perfectly still and allowed the door to be opened. I slowly reached inside and gave him some neck scratchies and gently attached a leash to his collar. And then together we stepped back down to the ground.

We then walked a few feet to the first shrub we saw and after holding it all night, he peed his first pee in nearly 12 hours. And he sure did have to go!

Moments later he jumped into the back of my car and off we went. I watched him in the rear view mirror as we drove off. He was sitting up and staring out the window. But a few moments later I suddenly could not see him. I stretched my neck as far as I could and I found him. He was curled up in a ball on Scooby’s car bed. Sound asleep.

And that’s when I called Francis and told him I had Dutch. And that everything was ok.