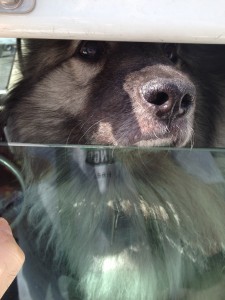 The dog in the photo peeking out the window is one of the bravest dogs you will ever meet. Because he did something that he knew he should not do. He let a stranger into his home.

This brave boy is Dutch.  An 8 year-old, 60 pound Keeshond rescued six years ago. And with every reason to not trust again. But when he met Francis, a long-haul truck driver, everything changed. And since that day these two best friends have traveled the country together. As Francis said, “Dutch is my one and only. We’re a team.”

But at that moment Dutch did not know why a stranger was suddenly at his door trying to get inside. He did not know that his dad Francis lay in an emergency room awaiting surgery. All Dutch knew was that he’d been alone all night. And now someone was there calling his name. Someone he did not know.

Francis arrived at the hospital the night before and in a lot of pain. He was not sure what was wrong but he knew it wasn’t good. Still he was hopeful he’d get in, get checked and get back to his truck parked at the truck stop ten miles away. Where Dutch was.

Because when you’re 1,700 miles from home you don’t want to think about ending up in an emergency room. So when he left his truck he told his best friend he’d be back in a couple of hours. But that’s not what happened.

Because those two hours turned into a lot more when he was admitted to the hospital for emergency surgery. Lying in his hospital bed all he could do was think about Dutch. About how scared he must be alone in the truck. He had food. He had water. But he didn’t have Francis.

This stoic and pensive United States Veteran that carries the same name as the Patron Saint of Animals spoke softly and measured his words carefully. He had faced fear many times before. But this time his greatest fear was not his own pending surgery. His greatest fear was what would happen to Dutch.

In frustration he told the emergency room staff: “I don’t care if you have to cut off my whole leg. Just let my dog be ok.”

The next morning as he learned he was not leaving anytime soon he told his ER physician that his dog was still in his truck and he was worried sick about him. And with the sun coming up he knew he needed to get help because it was going to be a warm day.

His ER physician was named Sarah. And with every bit of good luck on his side at that moment it turned out that Sarah knew all about The Pongo Fund.

But she didn’t just know about it casually. Sarah is part of The Pongo Fund.  One of an elite group of volunteers that do all they can when they can to help people and pets through the toughest of times. And this was definitely one of those times.

What Sarah really wanted to do was leave the hospital and head to the truck stop and get Dutch. But she could not because a school shooting had just occurred moments earlier and her ER stood ready for victims.

Instead she turned to the group that she herself gives her time to. She turned to The Pongo Fund.

This is what she said: “I have a patient who’s a truck driver passing through. He’s going to need to stay in the hospital for a couple days and his dog is in his rig at the truck stop. He hasn’t been out since about 10pm last night….how can we help?”