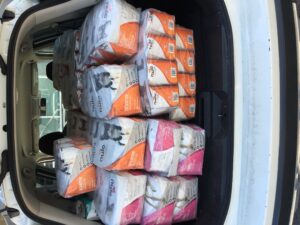 Sometimes we never see it coming. Even when we think we do. At least, not this time. She lives on the Oregon coast, a salt-of-the-earth disabled woman in a leaky trailer. Small monthly social security check is all she has. She gleans, she scavenges, she does everything she can but what she does most of all is love her cat.

When COVID hit The Pongo Fund responded in force, doubling our pet food bank distribution sites to 100. Some of them were inside large local food pantries, other times more creatively placed on small community tables. Take something, leave something, those kind of community tables.

Because for a lot of people, COVID was more than a pandemic. It pushed a lot of folks over the edge, needing help for the first time. But not everyone is comfortable asking for help or going to a food pantry. But a community table? Much easier. Kind of like sidewalk shopping. Walk by, browse a bit, find what you need. We like that. Because meeting people where they are, when they are, that’s at the core of everything we do.

Because if we don’t do that, then animals go hungry. People too. Like her. Like her cat.

She’d been feeding the same cat food for years. It was the only food she could afford. Her cat ate it, so she thought everything was good. Then she ran out of food. And money. Someone told her about the community table we had set up nearby and she went there, thanks to a ride from a friend because no car of her own. She got enough cat food to last a few months, careful to make sure there was still plenty for everyone else. And there was. But with limited transportation she needed to make sure she got all she could, since she might not be able to get back again.

The food she got wasn’t what she was used to feeding. Not even close. She didn’t know anything about it except it said cat food. But we knew about it. And we knew it was some of the highest quality cat food made. Because The Pongo Fund uses only high quality foods. Because it’s important to us, because it’s important for the animals.

She called us a few days ago. Out of the blue, just another call. Or so we thought. Her call was to say thank you. That’s how we learned about her and her cat. But there was a lot more to the call. And that’s the part we never saw coming. Her voice soft, rickety. But also calm, kind. She told me everything I’ve already written above. Then a pause, and then a question.

Could I tell her where she could buy more of that cat food?

She said after feeding the same cat food for years, she thought that her cat liked it. He’d nibble at it, walking away two or three times before coming back to nibble some more. But he rarely finished, and she just assumed he wasn’t hungry.

But she said what happened next wasn’t supposed to happen.

Because everything changed when she fed The Pongo Fund food. The Nulo Pet Food generously donated by #Nulo. She said she put the same amount into his bowl and she walked away, like she always does. She’d go back to check on him a few minutes later and that was their routine. But this time when she went back to check on him, the entire bowl was empty. She said it looked like there had never been any food in it, like it was already washed.

Said her first thought was there were some other cats who had gotten into the trailer and eaten the food. It didn’t make any sense. He just sat there, looking at the empty bowl. And he would not move. She said she asked him if he was still hungry. But she never asked him if he was still hungry because there was always food left in the bowl. She said she was truly confused. So she put a few more kibble into his bowl and all of the sudden she understood what had happened.

Because he hoovered them up.

She said she felt happy and sad at the same time. Happy because she had found a food that he loved. Sad that for all those years she’d been feeding him a food he didn’t love. Even worse, it was the only food she could afford. So that very minute she decided she would begin saving money for the next bag of cat food, and this time, it would be the Nulo. And that’s when she called.

She wanted to know where to buy the Nulo cat food. In person, not online. Because she had no online. A place she could go, pay cash at the register, and then go home. Even better if she could walk there. And she was happy to tell me she had saved $10 for the purchase.

When she said $10, she could have said $1,000, because it was the same thing. Because having saved $10 was almost a miracle in her world. And she wanted to know where to take her $10 to buy another bag of Nulo.

I’ve talked with thousands of people about pet food over the years. Most of the calls are the same. But not all of them. And this was one of those.

Because what she didn’t know was that the bags of cat food she’d gotten from the community table were going to cost a lot more than $10. But I couldn’t tell her that because it would take her right back to being the woman who always needed to buy the cheapest food. The cat food she now knew her cat didn’t really like.

And I wasn’t going to let that happen.

So we worked out a deal, me and this woman. Asked her to please hang onto her $10, and we just happened to have some more of that food that we would get to her. But she wasn’t that easily fooled. She said if we do that, who does she pay? And that was a problem, because the goal was to get her the food but not take her money. So we talked some more.

We knew someone who loves day trips and that person jumped at the chance to be part of our Emergency Kibble Response Team — EKRT. She’d been on our volunteer wait list for a long time, just waiting for the chance to help. I think she might have been the most excited of all of us, when she got the call.

She asked for the game plan. Because she knew it wasn’t going to be as simple as just dropping off a bag of cat food. Not for The Pongo Fund, anyway. So we bundled together several bags of food, Enough food to last quite some time, so this woman didn’t need to worry about running out of food every month. And it would give our EKRT driver a chance to restock some community tables.

As for the game plan part, I asked if she would please take a look around and let me know how bad the situation was? The leaky trailer for example, was it one leak, or the entire trailer that leaked.

Later that day she told me what she found. The situation wasn’t a good one. Many leaks, many challenges. But she knew people in the area, and said she knew how to fix leaks. Tarps, tape. Stop the leaks now. Do more later. My kind of plan.

I waited for more from her, more details about what she saw and how it made her feel. Because sometimes being part of our Emergency Kibble Response Team is a heavy load, because it sometimes puts us face to face with things we wish we’d never seen.

I asked her the best part of the day, thinking she’d say that it felt good to be a helper. But she didn’t say that.

She said the best part of the day were the cookies the woman sent her home with.

Because sometimes we never see it coming.

If you’d like to help us keep out pet food bank stocked for the holidays, please click here: https://bit.ly/37joA5S. All donations are being doubled thanks to a generous donor.

Meals Served: 30 Million
Animals Helped: 207,000
Vital Veterinary Care: Yes we do
Spay & Neuter: We do that too
Lives Saved: Beyond Measure!

The Pongo Fund is honored to be included in the 2022 Willamette Week Give!Guide. Click the logo above to donate to our award-winning group.