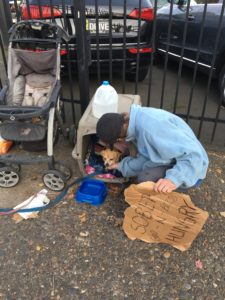 He was near the corner of a busy intersection. From across the street I watched him carefully set up dinner service for his two dogs, both of them senior Chihuahuas. First he poured clean water into bowls, then each one got a treat, then some pets, then dinner. That’s when I walked over to say hi. He’s been homeless a few days, is sleeping in someone’s backyard for now. I asked him what he needed, he said dog food. He was very specific about ingredients; he had no idea how much that meant to me. There was a pet supply store nearby, I went there and bought the food. I then asked him the same question again, what he needed, and he said he was fine. He stood there watching the dogs, he was at peace. And the dogs, they could not have been happier. I asked him what he was going to eat for dinner, and again, he said he was fine. I changed it around a bit, and this time I asked him what sounded good for dinner? He described chicken that they had at a nearby store. I asked him what was special about that chicken, and he said they could all eat it together. I’m a vegan. I didn’t tell him that. I gave him $20 for dinner and wished him a good night. This man, he was extremely soft spoken, embarrassed about their situation. He felt he’d let the dogs down. The man had no food, the dogs had plenty. The man had not bathed, the dogs were clean and happy. The man had no coat, the dogs had sweaters. And still, he felt he’d let them down. These moments break my heart. #portlandhomeless

I’ll be returning to see them again soon with all the winter gear they need.

Welcome to my world.

Meals Served: 30 Million
Animals Helped: 207,000
Vital Veterinary Care: Yes we do
Spay & Neuter: We do that too
Lives Saved: Beyond Measure!

The Pongo Fund is honored to be included in the 2022 Willamette Week Give!Guide. Click the logo above to donate to our award-winning group.