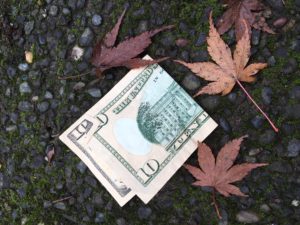 A kind gentleman gave us $10. It feels like much more than that. It was the Emergency $10 bill that he’d given his son years ago. His son faced a life of struggle and spent much of his time on the street; Dad always wanted to make sure his son had some money in his pocket for an emergency. They settled on that amount together. His son faced some demons, but these last several years a little dog named Lucy worked her magic and kept him going. Things were still rough, the demons did not leave, but Lucy did her best to keep them at bay. Dad told us that Lucy’s dog food came from The Pongo Fund. He also told us we’d welcomed his son on many occasions when he had no one else to talk to. He said we made a difference. The $10 was in his son’s pocket when he died. Dad now has Lucy and they’re doing great. Dad did everything you can imagine, but sometimes no matter how much you do, it’s still not enough. “Remember to be gentle with yourself and others. We are all children of chance and none can say why some fields will blossom while others lay brown beneath the August sun.” –Kent Nerburn

Sometimes I don’t know how to put into words the work that we do. Sometimes I’m not sure I even understand.

Meals Served: 28 Million
Animals Helped: 201,000
Vital Veterinary Care: Yes we do
Spay & Neuter: We do that too
Lives Saved: Beyond Measure!