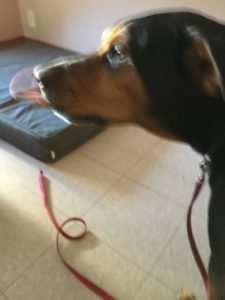 Thank you to everyone for helping us meet the match for Jack & Oliver. I saw them again today, it’s a tough road ahead. Jack has some heavy healing to do, thankfully Oliver is there with him. But this will take more than just Oliver. When I walked in both of them greeted me happily, one of them a little more happily than the other because of the treats in my hand. I also brought along a giant bed, because this is a giant dog. It’s such a heartfelt feeling to see all these things lined up along the wall; fresh bag of kibble, the bed, the food bowl, water, treats.

Oliver is such a chill guy, but he got so excited when he saw me that he went to his food bowl and picked up a few kibble and dropped them at my feet. He waited until I picked them up. They were for me. The ultimate compliment, he made me part of his pack.

I got down on my knees to thank him, gave him some hugabugs, some neck noodles, then I found his sweet spot, the smackem spot on his heinie and I rumpathumped him a few times and got his generator leg going bigtime. His tongue was out, flailing this way and that. That’s one of the photos, sorry it’s blurry, but my good hand was being used for the rumpathumps and this is the best photo I could get. But the big circle there, that’s his tongue, happy dancing. It’s like it had a life of its own.

His Providence nursing team is just the best, they greeted me with a smile even though I’m carrying a giant dog bed, when’s the last time you saw that in a hospital? And yet, they were so happy to see me and they know I’ll be back again soon. Seeing Oliver happy helps Jack too, and that’s the least I can do, right?

It’s a beautiful day in Portland, sunny skies, the birds are out, a day like this is a special gift. Yet this is still reality. Jack is in the hospital, he’s not well; he’s homeless otherwise. Thankfully the most important thing in the world is there with him, but other than that, a sobering reminder of how life works.

I’m talking to Jack about some things he might need, and as I looked around the room it hit me. He’s got nothing. These are hard moments. The sunny day is not there for Jack, he keeps his window blind drawn. Oliver is the sunshine for them both, of course he is. Man’s Best Friend.

I’ll be there again soon.

For Jack and Oliver.