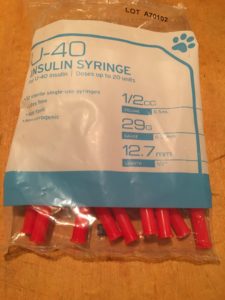 Red syringes. Orange are the most common, but she needs red. Most of you won’t understand. But you will in a minute. And you’ll never forget. She was a longtime drug addict, those are her words, not ours. IV drug use was her survival tool. She lost pretty much everything because of it. And then she stopped. She did it herself, it was that or die. She lives in a place with a lot of other folks who face some challenges. But they persevere, they survive. They live their lives, but always aware of the triggers that wait to hit them when they’re not looking. Like orange syringes.

Her cat, a sweet older girl named Samantha, she’s in bad shape. Diabetes has taken a toll, and for those without funds, finding the money for the bloodwork and the insulin is about as likely as winning a lottery. And that’s where The Pongo Fund comes in. Because sometimes having us on your team is like winning the lottery. Those were her words too.

The connection between these two runs deep, losing one means losing both. Samantha could barely walk, her system was shutting down. Dr. Melissa and Dr. Robin ran the bloodwork on the spot; the results told us what we needed to know. It wasn’t good. She needed insulin, and she would keep needing insulin. As many of you might know, small non-profit groups don’t provide insulin. It’s expensive. And the need continues every time a bottle runs empty. And then the bloodwork rechecks. And then more insulin. But Samantha would die without it. And maybe her Mom too.

We’ve got this little emergency bank account, for veterinary care and supplies, some of you donate to this fund for times like this. There’s not a lot there, but it’s for matters of life and death. This was that.

Yes, we got the insulin. But back to those syringes. We needed red ones, not orange. Here comes the punch to your gut. Because the orange ones were the syringe of choice for IV drug addicts, and she used them for years. Just looking at them brought back the anxiety, the urge. They called her name. She was brave enough to tell us. Because giving Samantha’s Mom orange syringes would be taking her back in time to a dark place. And all it takes is one moment, one mistake.

She said anything but orange, she pleaded with us. We found red. And while that may not seem like a world of difference to you, it was for her. And for Samantha.

Because two days after the insulin started, Samantha was doing better. How did we know? Because her Mom called to tell us. She was so thankful she wanted to share the news. It will take time, but it was a start. She was starting to walk a little bit again, her appetite was returning. Both were great news. All because we had red syringes.

For us, we think about red syringes. Not orange. Red.

Being there for those when they need us most.