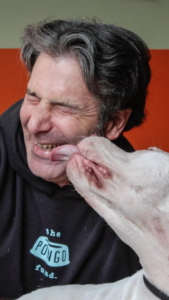 Every name has a story. These were some of ours.

A Dog named Cat and a Cat named Mouse and one lucky goat named Turtle. Just a few of the animals The Pongo Fund helped this year.

A bunch of Franks and Petes and Peters, but the Peters were different than the Petes. Plenty named George but still never enough. Because George.

A dog that was named Killer and treated terribly. And now she’s got a new Mom who named her Cupcake and she lives like royalty.

There was a lot of other royalty too. Kings and Queens. Queenie. Prince and Princess a plenty, and Duke and Duchess too.

Even a Jester. And a Chester. An Esther. A Sylvester. And Professor and Poindexter.

Some Scoobys and Lolas too. L-O-L-A, Lola, La-la-la-la Lola

We helped them all, A – Z, Apple to Zeus. Each one with a common thread.

Each one of them, was the best. Absolutely perfect in every way.

The ones who could not stop cuddling. The ones still learning to not pull away from cuddles. Some so small they could live inside your shirt. Others so big they couldn’t even fit on the bed. But they try.

And the man who raised an orphan calf who slept on his bed. You sir, are my hero. Thank you. Though he said, he was the lucky one. That too.

The dog with one eye. The cat with none. A dog who shimmied when he walked but didn’t care. A cat who sometimes dragged her back legs but simply made it look like she was dancing. Still perfect, all of them.

Plus, that cat could climb every piece of furniture in the house and she jumped like Michael Jordan.

Dogs missing pieces. Ears. Eyes. Tails. Teeth. Legs. Cats missing them too. And a lot of whiskers nowhere to be found. But what tales they must have to share.

Some three leggers but mostly four. Sometimes almost six when you count the Polydactyl cats, but not really six.

Because we know, if anything happens to those people, then their animals have no one left. And that’s not good. So being a helper. We like that.

The woman afraid to talk because she had no teeth. We made a call. We helped her get some. The man who could not listen well for the want of hearing aid batteries. He got them. And for the many who thought life was passing them by, they got readers. I did too. They are inexpensive buy, but worth so much more. And for about $3 a pair, we make sure everyone has them.

And we do it because we need people to be able to read the fine print on their dog food bag and know when to dispense their cat’s medication. Laugh as you might over $3 for a pair of readers, but they’re the same ones I wear.

For everyone we helped, let this be a reminder that life is good. Even when so much of our time is spent helping those, for whom it is not. That’s the hard part. How do we help them all? Don’t know the answer to that one.

But we do know this. The clock will soon strike midnight and we will begin again, in a New Year. Doing the work anew, that we’ve been doing for the past dozen. Because at our core, we are helpers.

I hope you’ll be here with us. Because everything we do, we do together.

One last thing, and it’s the thing I hate to say, but I must. Until midnight tonight, ALL DONATIONS WILL BE TRIPLE MATCHED. That means whatever gets donated, will be tripled thanks to some kind and generous folks who like the work we do. Just like you do. So there it is. And if you feel like making another donation before midnight, I hope you will please consider The Pongo Fund. Details are below.

There are three ways to donate, so please take your pick:

You can donate on our Give Guide page here: https://giveguide.org/nonprofits/the-pongo-fund%20

Every dollar. Every donation. TRIPLED!

“Until one has loved an animal, a part of one’s soul remains unawakened.”
–Anatole France.