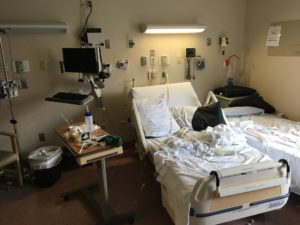 This is a hard one. Jack and Oliver were discharged. I missed them by less than 10 minutes. As someone told me, maybe I was supposed to miss them by ten minutes. Maybe saying goodbye would have been too hard. But still.

Jack shared his words carefully, not just with me, but with the nursing team too. I’ve found this to be the case with a lot of homeless people. Sometimes saying little is their safe haven. Oliver, on the other hand, loved to talk. He squealed with delight every chance he could, using his voice, his ears, his paws, whatever he had, to speak his love. When he sat up and wrapped his paws around my neck and pulled me close, when he slurped my face like a cupcake with frosting, I melted on the spot.

Jack and Oliver hit the jackpot when they met The Pongo Fund. They both knew it too. But while Jack struggled with it, Oliver did not. He was a therapy dog, never far from Jack’s side. That was his job. One of the nurses told me they could barely get those two apart. One time when Jack was too weak to walk one of the nurses volunteered for Oliver’s potty break, but Oliver struggled to leave Jack. Yet Oliver saw me differently, somehow trusting me like an old friend. Maybe we didn’t speak the same language in words, but we spoke the same language in love. Me and that dog, we had a thing.

The Pongo Fund brought Oliver food, bedding, treats, leashes, love and so much more, along with all that great veterinary care from Dr. Alayson and CVT Marie. But at the same time we were there for Jack every step of the way.

Jack did not want to go back to the homeless shelter, so we worked on a plan to get him housed for the next 30-60 days. We had things set up with food, shelter, someone to regularly check on him, someone to drive him to medical appointments, pretty much the full-meal-deal. Because making sure Jack was safe meant that Oliver would be safe too. That’s one of our mantras: by helping one we help both.

But conversations with Jack were both brief and delicate, because Jack was still unsure why a total stranger would be doing all that we were doing. The offer of any help was not easy for him to accept. So it was baby steps. We were there for Oliver, and Jack appreciated that, but each time we also made sure to do everything we could for Jack. And it was working, with Jack opening up a tiny bit more each chance we had.

The discharge notice came earlier that morning; there wasn’t much of a plan. And that’s how we missed him by 10 minutes. And as much as I wish it were different, that’s what the world had planned.

In this line of work, it’s imperative to celebrate the small victories. Jack and Oliver, they are just two of the tens of thousands The Pongo Fund has touched during these past few years. And despite the frequent sadness of many situations, there are also many things to celebrate. And at times like this we need to quickly find those things and celebrate them for the blessings they are.

Jack and Oliver both had clean, warm beds to sleep in, good food to eat, fresh water to drink, and a place where they were safe. I don’t know the last time they had those things in such abundance.

And this is really cool. As I’ve noted several times, Jack didn’t say much. But here’s one of the small victories, and we never saw this one coming. When Dr. Alayson, CVT Marie, and I left their room and were just one or two steps out the door in the hall, all of a sudden Jack was a chatterbox, talking to Oliver about all sorts of things.

A reminder that none of us know what it’s like to walk in someone else’s shoes. Jack didn’t easily talk to us, but he had no problem talking to Oliver.

And here’s one more thing to celebrate, but you may need to read this part twice to really get it. Because sometimes finding the celebration is like peeling back an onion. Not right there in the first or second layer, but just below that.

When Jack left he was not in the best of shape by any means. But that’s his new normal. As he left, I’m told it was more of a shuffle than a walk. But still, it was something. He was weak, but yet he managed to gather the things that were most important and somehow hold them tight. A big bag of dog food for Oliver; the stainless food bowls and leashes and new collar and Oliver’s toys, those are the things he took. He also made sure to take the new jackets we’d bought for him, socks, hat and more. Remember when he asked for a jacket? We got him two!

I’m not sure how he carried all of that, but he did. Sadly, he was unable to take Oliver’s new bed. Truly, it was huge, so I took that with me and the next dog to use it will enjoy knowing that Oliver used it too.

But maybe the most important of all, was that Jack found a way to take with him the prescription medications Dr. Alayson had prescribed for Oliver, the ones she’d filled right there on the spot. If only you could have seen what I saw in that moment.

Jack in his hospital bed, blankets pulled tight to fight the chill, surrounded by all of his own medications. And there, a few feet away, were medications for Oliver. There was something perfect about that moment.

Dr. Alayson even wrote a daily prescription log with check boxes to make sure Jack knew what medication to give and when to give it. There was no computer, no fancy paperwork; just a handwritten page with words and boxes. This is veterinary medicine old school. And a reminder that sometimes all the fancy equipment in the world can’t take the place of human compassion.

Being there for Jack and Oliver. Godspeed and Good Health to you both.