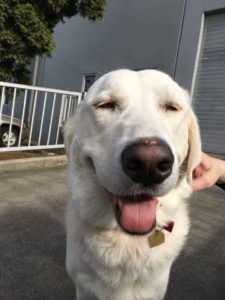 I saw them as I drove up, a man sat in the driver seat, a big fluffy dog hung his head out the window. I smiled at the scene. Then suddenly the man was outside my window. He quietly asked if I worked with The Pongo Fund, I said yes. He asked for some information; we talked, I gave him the website address. He said he would find a laptop to learn more. Find a laptop; I know what that means. I complimented him on his dog, still hanging out the window, big smile on his face. His face lit up, he loved that dog.

He asked about some of the details I’d shared; we walked through things again. He spoke slowly, his words arrived with consideration. He asked about food. He needed to find a laptop. He quietly asked about food again. There were a couple other things too. Sometimes you play the hunch.

I asked him if they needed food. He said no. He shuffled his feet, he looked down, he said no again, they were ok. Then he said they’ll be ok. They were ok or they’ll be ok, those were two different things.

He’ll find a laptop and read about us and he’ll come back if he ever needs food. There was that “find a laptop” again. I asked what kind of food he fed his dog, his name was Hobbs, and he rattled off a list of things but none of them was dog food. I waited. He continued. Hobbs hung out the window. And when it felt right, I again asked if they needed food. He said no. I asked what Hobbs had for breakfast. He said they hadn’t eaten yet. It was 2pm. They hadn’t eaten.

I asked about dinner last night. He shuffled. I did an end run with the same conversation, hoping to get further. And finally we got there. They’d been out of food for a while, he didn’t remember how long. But instead of talking about food he wanted to talk about Hobbs. About what a great friend he was, about how much he loved him. That was the conversation that brought him joy; talking about being out of dog food made him sad. Hobbs didn’t care; he just loved hearing his name.

In the back of my car I had food. I got him a bag, a big bag, and we walked the few feet to his car and put it in the back seat. Hobbs was on it immediately, happy dancing next to this bag of food that would be his breakfast and dinner for today, tomorrow and for days to come. Hobbs regained his driver seat position, and a moment later he jumped out the window to thank me in person.

This dog that was soft like cotton pushed his head into my legs, getting ear scritchies and head bops and butt smacks. And he pushed more and I gave more and the man, he looked at how happy Hobbs was and he looked at the bag of food and he stood silent.

I had just left an emergency situation that we could not help, now we’ll work on the palliative side of things, that happens sometimes but it hurts. And now here was this dog giving me a chance to think about something else. I needed that, I really needed that.

This man, he quietly said “thank you, you don’t know how much this means to us.” I told him, both of them, that they were welcome.

But the truth was, they didn’t know how much it meant to me. Because it meant a lot.

For Hobbs. Hungry no more.