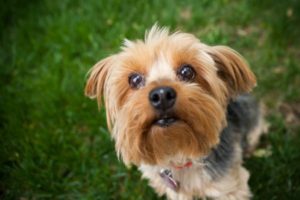 You’re not an addict or substance abuser, you’re not mentally ill or anything like that. You just had some bad luck and now you’re working as hard as you can to turn things around. And the only thing to remind you of what love is, to keep you grounded, is your 14 year-old Yorkie named Gus.

Gus had no idea anything was different, he was tucked inside his Mom’s shirt just like always. They had a home, “had” being the key word. Then they fled violence, the kind of violence you never expect, and they drove north and now their home is their car. The night shelter they stayed in left them both with fleas. One call then another and she found Pongo.

She told us about the fleas but she needed so much more than that, but whether she was too stubborn or too proud, those were her words, not ours, she refused to ask for help. Because that’s how the beatings started, she asked someone for help. His help led to pounding her stomach, then her ribs, then her head and then he kicked Gus and they were gone.

She said she had a list and called everyone on that list and luckily The Pongo Fund answered the phone. We got there because we had to get there, because there was no one else. We knew we could handle the fleas, we also knew that wasn’t the biggest problem. Making this woman feel safe and respected was the most important thing and that was going to be a little bit harder because trust was not something that came easily for her.

The first thing we did was hold Gus, and once she saw that, how he burrowed in close to my Scooby hoodie, that was the moment she let the tears flow. Because she knew they were going to be ok.

They left their fleas in Portland, and we sent them on their way with enough medication to keep those fleas away. We provided Gus with a special backpack filled with his favorite foods, Lola sent along some of her favorite treats, we added a Gus-sized little dog bed, a teeny-tiny harness, new collar and leash, all the things he needed because Gus deserved more than a little rope leash but that was all they had.

For this moment in time they were safe, on their way north to stay with family, to sort things out. Low-on-air tires got some air, an empty gas tank got filled, an empty cooler bag got some snacks to help with the drive. And a hurting heart got a chance to trust again, if even only for a moment. She hugged me and said I’ll never understand just how hard it was for her to give that hug.

It won’t be long before she sees the envelope on her passenger seat, and she’ll open it and find some travelling money, and a couple of gas cards too. The tires got filled, the tank got filled. We hope her heart got filled a little bit too.

Being there for those when they need us most.

Sit. Stay. Eat. Live. thepongofund.org
(To protect their privacy, photo is not Gus)