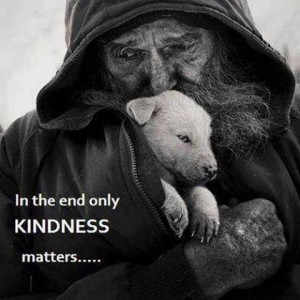 A reminder. Hunger is more than just an empty stomach. That’s why every day The Pongo Fund strives to do more. To help more. To be more. But that doesn’t mean just giving out more food. It means feeding stomach as well as soul. There is no secret recipe. We just try.

Because too many people tell us that too many places simply hand them something. A box. A bag. Papers to be completed. Sign here. Stand there. And they tell us that even though they leave with something, they still leave empty.

During the past few weeks The Pongo Fund has delivered countless and healthy jam-packed people food boxes for many fragile families. And books for their kids. Hats. Coats. Gloves. Toothbrushes. Toothpaste. Sleeping bags. Socks. Some basics. Some not-so-basics. But each item given with love. And each one received the same way.

“Never worry about numbers. Help one person at a time and always start with the person nearest you.” – Mother Teresa

We do this work quietly. Cautiously. Respectfully. Because hungry people have hungry pets. But sometimes the need is more than pet food. Sometimes the greatest need is hope.

During December The Pongo Fund will provide food for more than 1,000 hungry animals. And we’ll also help feed quite a few people too. Because if anything happens to one of them, two-legged or four, they both lose. And during these cold, wet, wintry days, the need is greatest. Right now.

This past Sunday, on a chilly, wet day, our pet food bank was open. And yesterday we were out again, on the streets with a series of Pop-Up Pongos, delivering what we could where we could. Helping as we could.

Because to be a helper, that is the best gift of all.

“Too often we underestimate the power of a touch, a smile, a kind word, a listening ear, an honest compliment, or the smallest act of caring, all of which have the potential to turn a life around.”– Leo Buscaglia

Everyone we helped felt it differently. Some found it in the form of a small food box. Some in the form of new, super nice socks. Some got gloves. Some got hats. But for some of them, what they got was magic. I know this because they told me so.

A reminder that it’s not what it is. But what it means. And if someone said they got magic, then let’s cheer the magic.

“And above all, watch with glittering eyes the whole world around you because the greatest secrets are always hidden in the most unlikely places. Those that don’t believe in magic will never find it.” – Roald Dahl

One of the most magical moments was reconnecting with a man who I met last year. Back then he told me how The Pongo Fund had helped him reenter a world that he felt had left him behind. But now he was part of it. And he loved it.

He was still there, on the street. But he was Happier. Healthier. He had Hope. And seeing us again just added to it. But the real gift was for us.

Because what he didn’t know is that his hope brings us hope. And for that we are forever grateful.

Bringing hope. And believing in magic. Why not?

The Pongo Fund is a pet food bank. We’ve provided more than 9,000,000 high-quality meals to date and helped keep some 80,000 at-risk family pets safe at home and out of the shelters. We have become a national model for new ways to save lives and reduce shelter populations.

But deep inside, we know it’s magic.

All thanks to you.

There are just a few days left in 2015. We hope you will select The Pongo Fund to be part of your giving. The donation link is here:https://www.thepongofund.org/contact/donation-page/ .

(Photo of man and dog is representative only)