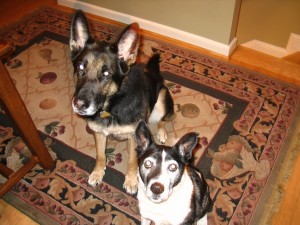 The big beautiful girl on the left is Dolly. She was Pongo’s best friend. A sweet gentle giant that lived as a lapdog. We met her on the side of the road one day in April, 1996. It was raining. And there she was. Laying in the mud. Dirty and wet.

If anyone approached she would quickly get up and move a few steps away. And then she would sigh and lay back down. Even dirty and wet and laying in mud she looked regal.

Yet she was all alone.

She was big. And she was fierce looking. But when she sighed, she sounded like a puppy. It was clear that her life had not been easy. Her general appearance was one of suffering. Several spots were missing fur. She had some cuts and scabs, both old and new. Some tumors. A gash on her forehead. And she was missing many teeth. And of the teeth she had left several were broken or worn down to the nub.

We didn’t know what brought her to this place where she was now. But there she was.

At that moment Pongo and I were just finishing our morning walk. And that’s when we found her. Some other neighbors were also there trying to corral her. But she would have nothing to do with it.

Seeing that the situation was serious Pongo and I rushed home and I jumped in my car and drove right back. But this time I had a pocketful of kibble with me.

I opened the back of my SUV and began placing a Hansel and Gretel line of kibble from the rear cargo hold to the ground and then more kibble every few inches. I placed the last kibble a few feet from where Dolly was, careful to not frighten her.

After a few moments she got up and ate the kibble closest to her. Carefully watching everyone to make sure no one could get close enough to hurt her. And then she took the next kibble. And the next. And she followed the kibble trail and munched her way straight to my car.

And then it happened. She jumped right up into the back and shook herself off. The inside windows were immediately coated with water and mud. She then walked straight through the car and sat down in the driver’s seat. She let out a bark and then curled up into a ball.

The next step was tricky. Because I needed to sit in that same seat. The seat that was now soaking wet. But I did not know how Dolly would respond when I tried to share the seat with her. A few more kibble placed on the passenger seat did the trick and she moved there.

And then we drove home. With her spread across the seats so she could keep her head on my lap the entire time. It could not have been comfortable for her. But I loved it.

I did everything I could to find her family. Including walking all through the neighborhood thinking she would walk me straight to her house. Literally miles of walking. And every now and then Dolly would stop in front of a house and just stare. I’d get excited and ask her “is this where you live, sweetie?”

And she’d wag her giant tail that commonly knocked things off of tables and lead me straight to the door. We’d ring the doorbell expecting to find someone who knew her but it was always the same. No one had ever seen her before.

But over and over she did this. Until I figured out that for her it was just fun. And that’s when I knew she had already adopted me.

The final moment came a few days later when I saw a lost dog ad for a German Shepherd that sounded exactly like her. I called and spoke with a young girl who was in tears over her lost dog.

The dog she described sounded perfect, like maybe this was it. Until one crucial detail proved to not be the same. And then I knew this dog was not hers.

I was just as heartbroken as she was. I asked her what her dog’s name was. She said Dolly. And I told her from that day forward this big beautiful purebred German Shepherd would be known as Dolly. I did it for her. I really did.

But I also thought it would be so much fun to wake up every morning and say “Hello, Dolly!”

And every day from that day on that’s exactly what I did.

Dolly passed away nine years ago today. It was June 20th, 2006. The hurt is still too fresh for me to talk about. In nine years this may be the most I’ve ever said.

I still love her to pieces and miss her like it was yesterday. But she visits me often and for that I am grateful.