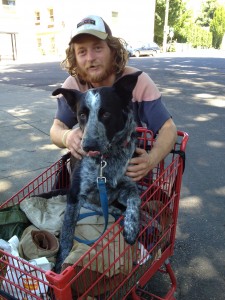 He approached the garbage can outside the store in a way that told me he had done it many times before. Gently pulling the lid to the side and peeking inside, seeking the treasure to redeem a nickel at a time.

But this particular garbage can was messy. The lid was askew and there was garbage on the ground outside the can. It wasn’t pretty.

I was stopped at a red light and watched it happen. Lid off. Peek inside. Lid on again. I could quickly see by the man’s actions that this can held no treasure.

And then he and his best friend rolled off, having left this little piece of the world in better shape than they found it.

But before I saw any of that, what I saw was the dog. A sweet boy riding around in a shopping cart. That’s what first caught my eye.

At the next block I caught up with them, parked and said hello. His name was Tim; he’s the one on his knees behind the cart. And inside the cart riding like royalty was nine-month old Ted. They’d been together since Ted was a tiny 6 weeks old.

On the road with a dream to get back home to Iowa. But not too fast. First they were going to visit some old friends and make some new ones. And then they’d hit the road for the highway home.

I asked if Ted needed food and Tim said they would be honored. And when he opened his Oregon Public Broadcasting logo satchel to put the food inside, what I saw was a meticulously organized bag filled with Ted’s supplies. Food and more food. Water bowl. Extra leash. Vet records. It would have made every organizing expert proud.

And the best part? The food they already had was our Pongo food. Food they’d received earlier from one of the many other groups that we provide food to.

We talked for a few moments but what I really wanted to know was more about Ted and the shopping cart. Because I wanted to make sure that he was ok.

And that’s when Tim gave me a funny look. Like maybe I’d asked a question that I should not have asked. Like maybe there was something hidden inside the cart that Ted was sitting on to keep it hidden. But I was wrong.

Because at that moment Tim reached down and pushed on and lifted and fluffed the assorted goods that Ted was sitting on to show me how cushy and comfortable it was for Ted. And at that same moment Ted turned his head backward and gave Tim a smooch. But that wasn’t all.

Because Tim then went on to say that it was way too hot for him to let Ted walk on the already scorching sidewalk. Kindly explaining to me that a dog’s paws are no different than our own bare feet. Further explaining how easily a dog’s paws can become burned and how painful that would be and how we need to remember if it’s too hot for us then it’s surely too hot for them.

He then said his own feet were hot and he was wearing shoes. And there was just no way he’d let Ted burn his paws on these hot days. And upon hearing that I broke into the biggest grin because it was just what I wanted to hear.

A man living his life in a way that surely was not always easy. Yet making sure along the way that his dog had it easier.

But Tim wasn’t a large man, and Ted weighed a good 65 pounds. Meaning that getting Ted into that cart could not be easy. And I asked him about that; how he gets Ted into and out of the cart?

And he looked at me again with his easy smile, and said “we do it together.”

Tim and Ted. Ted and Tim. On the road together. Fueled with food from The Pongo Fund.